By signing this agreement, all members agree to accept the terms contained within. 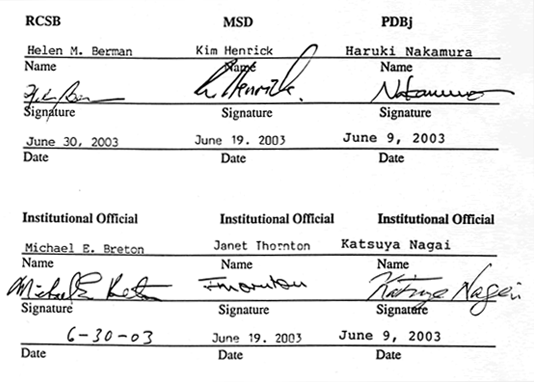 The Protein Data Bank (PDB) is a worldwide resource. At present, data are deposited and processed by three groups: the PDB managed by the Research Collaboratory for Structural Bioinformatics (RCSB), the Macromolecular Structure Database (MSD) group at the European Bioinformatics Institute (EBI) and the Protein Data Bank Japan (PDBj) group at the Institute for Protein Research in Osaka University. All processed data are sent to the RCSB who oversee the process and distribute the data worldwide.

It is essential for the progress of global science that the PDB data is maintained as a single archive of PDB data and is kept freely and publicly available. The three groups are fully committed to this principle. They also acknowledge the importance of global equality in the ability to deposit and access data and the need to have true international involvement and collaboration in maintaining the PDB.

The Worldwide Protein Data Bank (wwPDB) has been created to provide an organizational structure whose purpose is to uphold these principles.

2.
Definition of membership in wwPDB

The founding members of the wwPDB are the PDB managed by the Research Collaboratory for Structural Bioinformatics (RCSB), the Macromolecular Structure Database (MSD) group at the European Bioinformatics Institute (EBI) and the Protein Data Bank Japan (PDBj) group at the Institute for Protein Research in Osaka University. All three organizations serve as deposition, data processing and distribution sites.

Proposals for new members would be reviewed by the current membership starting two years after the official establishment of wwPDB.

Questions about adherence to the guidelines set forth in Section 4 will be discussed at the yearly meetings of wwPDB as described in section 6.5. Serious violations by a member will be considered by the wwPDB as the basis for withdrawal of that site from membership.

3.
Definition of terms
3.1
The PDB archive consists of two sets of flat files:
1)
the legacy PDB format as described in https://www.rcsb.org/pdb/file_formats/pdb/pdbguide2.2/guide2.2_frame.html
2)
files in mmCIF format that conform to the PDB exchange dictionary described in http://mmcif.pdb.org
3.2
The PDB exchange dictionary describes the syntax and semantics of PDB data that are processed and exchanged. It is designed to provide consistency of data that are processed by different people in different organizations. The definitive exchange dictionary is kept at http://mmcif.pdb.org.

The term 'PDB archive' does not refer to the web sites, browsers and database query engines that will continue to be developed by the various sites.

Other data formats and delivery methods may be included in the PDB archive in the future after full discussion and agreement among members. New formats must follow the naming and description conventions of the PDB exchange dictionary.

Software is not part of the wwPDB. 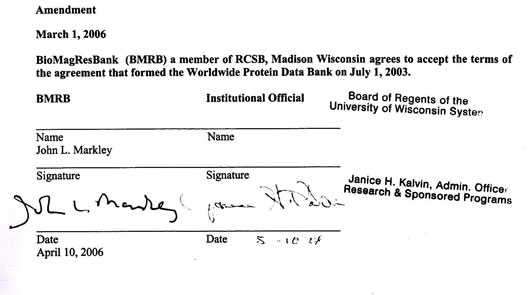